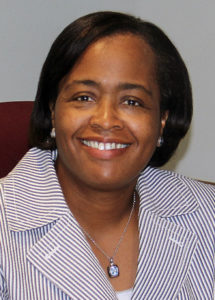 A transfer from the Junior League of Washington (DC), Lutheria Smith learned quickly about the importance of connection to the League. Her first JLRV placement, while she enjoyed the work itself, was isolated from other members of the League. In our conversation, she shared many examples of her strong connection to the League that resulted in personal and professional growth. Lutheria served, and continues to serve, the League in numerous leadership roles (President, Stocked Market Co-Chair and Merchant Co-Chair, Marketing VP, Administrative VP, Membership Advisor, and currently a Sustaining Director).

Among the lessons imparted by her mother, Lutheria Smith was taught about the importance of service for the benefit of others. Lutheria’s mother relayed the story from her own childhood, where she and her mother (Lutheria’s grandmother) went to town to run errands. On the drive in, they saw a woman that needed a ride. After their appointments were concluded, it had been a very long day and both women were ready to return home.  Her grandmother saw that the other woman still needed a ride and offered assistance.  Lutheria’s mother asked why they were stopping now when they were so tired and finished with their own errands.  Her grandmother offered words that had a lasting impact on her mother as well as Lutheria, “If we took her when we were on our way, it wouldn’t have helped her.  It is only if you’re going out of your way for someone, that you’re doing something for them.” Her grandmother’s lesson of doing good for another person, unrelated to your own convenience, has been a lesson that impacted her family through generations.

Having just moved to Roanoke and hoping to build her own community, Lutheria was ready to resign from the League and pursue community service options through her employer. She met Sherry Thompson and Julie Komer at a party, voiced her apprehensions, and was convinced to remain in the JLRV. She was placed at the Stocked Market the following year and felt that the League embraced her through that placement.

“To whom much is given, much is expected.  If you’ve been given a lot, you should be giving a lot. And I feel like the league gave me many opportunities to give a lot.”  While in leadership, Lutheria went on site visits to determine which organizations would receive grant funding. Bethany Hall applied for a grant but ultimately, the League was unable to award funds during that cycle.  The visit to Bethany Hall remained fresh in everyone’s memory and the membership came together to make the house look truly like a home.  In a project conceived by Amanda Bounds Leffel, items were donated and members worked 2-3 hour shifts to clean, paint, and care for the home.  “I don’t even scrub my own bathroom [like I scrubbed that one],” Lutheria joked. The residents came home for the day and were brought to tears. Their joy caused the League members to also shed tears. A lasting impact was made on all the women, visitors and Bethany Hall residents alike, that day. 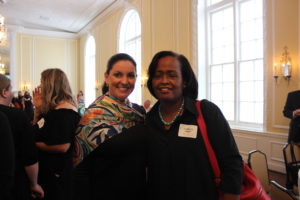 The strength of the League contributes greatly to the strength of its membership. Through the leadership and board training she received from the League, Lutheria has held numerous community roles.  “Community boards want trained volunteers and the Junior League knows parliamentary procedures.” In addition to her professional and personal responsibilities, Lutheria is the Vice-Chair of the Roanoke City School Board, Vice-Chair of the Roanoke Heart Ball committee, a member of the Roanoke Chapter of the Links, Inc., and a strong example of servant leadership for our membership.

Lutheria offered many illustrations of what makes the JLRV relevant and meaningful to the community.  In her own words, “I was new to the Roanoke Valley and learned about the needs of the community.  Then later I continued volunteering and served.  I would not have known about the needs if I had not been a member of the League. We were impacting the lives of children and their families.  We weren’t just giving money, we were on our knees scrubbing.”

I asked the highlight of her League experience, “In addition to getting the opportunity, the humbling opportunity to serve the community… I served as the first African-American JLRV President (and hopefully not its last), and [that is] one of the highlights of my life.  I’ve made life long friends. The league gives and gives and gives.”  Much like the advice of her grandmother, Lutheria Smith is a woman willing to go out of her way to help another woman or member of our community.  We are incredibly lucky to serve with her in the Junior League of Roanoke Valley.

By continuing to use the site, you agree to the use of cookies. more information