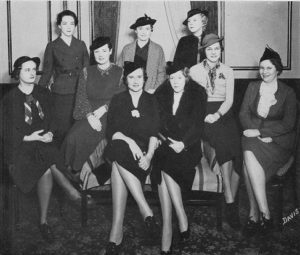 In October of 1926, a bridge club of twelve women formed the Roanoke Junior League.
They were “civic-minded girls” who wanted a systematic way of “doing their bit” in the community. The original twelve soon grew to twenty, and Mary Terry Goodwin Kuyk was elected to lead the group. During her tenure as president, the Association of Junior Leagues International accepted the Junior League of Roanoke.

Since its inception, the League has been committed to improving the lives of children. In 1928, the League started a health school and hired a dietician to teach underprivileged children the value of a healthy diet. The new chapter also had the daunting task of raising money to fund their charitable efforts. Early programs were funded by proceeds raised at bridge parties, plays and fashion shows. 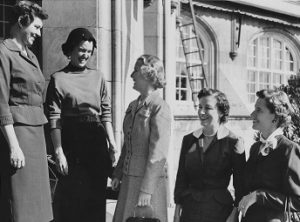 After the Roanoke Junior League incorporated as the Junior League of Roanoke, Inc. in the 1930s it opened a Thrift Shop to raise money. Then the League founded the Hospital Library at the Memorial and Crippled Children’s Hospital and committed to building a new clinic. The League then organized the Children’s Theatre and helped establish the New Community Chest.

Despite the tough times brought about by World War II during the 1940s the League still managed to work on improving the children’s wing of Community Hospital, continuing the success of the Children’s Theatre and supporting the Greenvale Nursery. In the early 1950s the League initiated construction of the Teenage Girls’ Center. 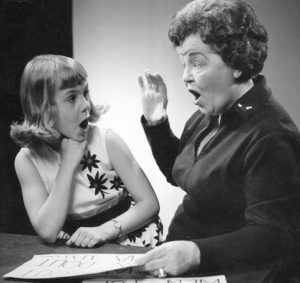 League members in the 1960s significantly furthered the mission of the Junior League. They provided a hearing test for school children in Roanoke and sponsored a supplement in the Roanoke Times that warned parents about the dangers of drugs. In addition they volunteered in the Toy Room at the hospital and helped to renovate a house on Patterson Avenue that served as a foster home for teen girls. The 1960s also brought about the publication of the first cookbook created by the League, Of Pots and Pipkins. It was a nationally renowned compilation of southern recipes, and it even earned a review in the Ladies Home Journal. 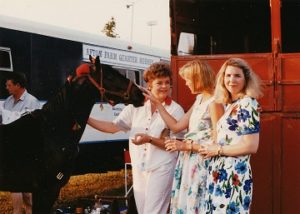 During the 1970s, the League celebrated its 50th Anniversary and worked to change its “white glove” image. Several projects instigated in this decade include the founding of the Ronald McDonald House, the Reading is Fundamental tutoring placement program and the Great Books program. Others include Festival in the Park, the Arts Council, Bargain Bazaar, the Roanoke Valley Horse Show, Designer House, Child Abuse Neglect Project, historical bus tours for children, and the Teen Outreach Program.

The 1980s witnessed the League’s departure from its Cherry Hill headquarters. The proceeds from the sale of this property were instrumental in establishing the League’s current status as one of the most heavily endowed chapters. In 1987, the League established the Mary Terry Goodwin Kuyk Scholarship to honor our first president. This scholarship fund rewarded two high school seniors who demonstrated outstanding volunteer service to their community. Kids on the Block, TOPS and POPS were instrumental projects of the 1980s and the Stocked Market Holiday Bazaar began its long tradition. 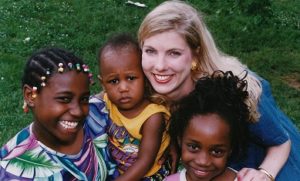 maintain a full-time job. Care that Counts, Project H.O.P.E., and an after-school program at Clearbrook Elementary School provided much of the focus of this time. The end of the decade witnessed the League’s creation of its second cookbook, Oh My Stars! Recipes That Shine.

In 2001, the Junior League of Roanoke Valley celebrated 75 years of excellence. More than 600 members continued to contribute to the community through the Pediatric Blood Drive, Aspire 2016, Bethany Hall, Carilion Medical Center for Children’s Volunteer Program, Kids in the Kitchen, and Young Women’s Leadership. By 2008, the League had adopted a new community vision, focusing monetary support and time to “Child Health and Welfare.” 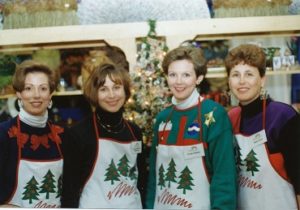 In 2016, the JLRV celebrated its 90th anniversary. Two years later, the organization was proud to celebrate 30 years of Stocked Market, its signature annual fundraiser. The JLRV has also adopted a new focus: addressing poverty by connecting the community to existing resources and removing barriers to healthcare and food. Today, JLRV looks forward to implementing new programs to address this need, and continuing positively transform the Roanoke Valley.

JLRV Accomplishments Since 1957 and Significant Achievements are also an invaluable JLRV history resource.

What have you learned from being a JLRV member?

By continuing to use the site, you agree to the use of cookies. more information